My name is Tim Carbone and I am a Systems and Technical Designer. I graduated Summa Cum Laude from Champlain College of Burlington, VT in 2020 majoring in Game Design with a minor in Game Programming. I am originally from Haverhill, MA. I have significant experience across a dozen projects and 5 years with roles including Lead Designer, Technical Designer, Producer, Programmer, and Product Owner. In particular, I have worked a lot with designing and implementing reward/progression systems. I work well in team environments, can program and script efficiently, and write exceptional documentation. In 2019, I was a Design Intern at Disruptor Beam in Massachusetts working on both Archer: Danger Phone and an unreleased character collection RPG based on a popular science fiction franchise.

I was the founder of Champlain College’s Game Leadership Group which allowed game development students across the school’s 4 game majors a space to network, run events like game jams with like-minded individuals, and give a voice to the students. In particular, we enabled the voices of students from minority or under-represented groups.

I’ve spent the past 5 years writing game design and story analysis pieces under the blog name Vicious Undertow. Some past pieces on my deprecated IGN-hosted blog garnered attention from many developers and one was even featured on IGN’s homepage. My current blog can be found here.

My favorite types of games to play are action-adventure, puzzle games, and narrative-focused games. My favorite games include Shadow of the Colossus, Bioshock, Transistor, and Outer Wilds. 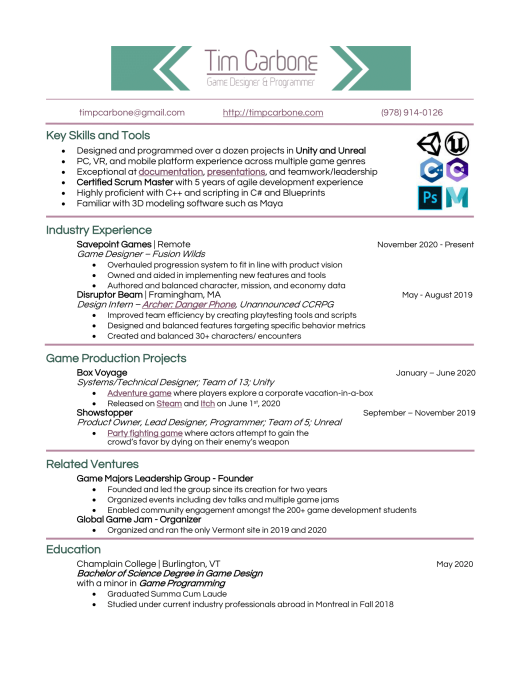